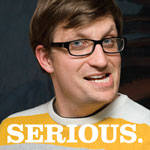 Matt Mooney joins me to reminisce about the Koala Fires and dispel rumors about the band’s demise.

We listen to a new Koala Fires demo, Matt plays a couple of acoustic songs and we go a little crazy discussing The Adventures of Buckaroo Banzai Across the 8th Dimension, what the heck a Norn is and other stuff that makes even less sense.

Show Notes
• You can purchase and listen to the Koala Fires music at http://koalafires.bandcamp.com/

• Watch some Koala Fires: In the Studio videos at http://vimeo.com/channels/koalafires

• “The Norns in Norse mythology are female beings who rule the destiny of gods and men, a kind of dísir comparable to the Fates in classical mythology.” – Wikipedia. Whatever.

• Radiolab is my favorite thing. Listen to this Episode about Memory and Forgetting.

• Sometimes Chicago is known as the “City of the Big Shoulders” because of a poem by Carl Sandburg. Look it up.

• Watch The Adventures of Buckaroo Banzai Across the 8th Dimension (1984) and try to tell me that Peter Weller isn’t awesome.