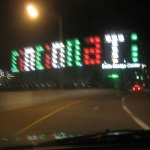 Thanksgiving is behind us now, which means Christmas music is going to be unavoidable for the next few weeks.

Back in 1998, I recorded a Christmas album for friends and family called Maximus Christmas and usually around this time of year I post them somewhere for free download. This year, in addition to seven of the tracks from ’98, I’m including two songs that I recorded in 2007, “Christmas in Cincinnati” and “Hey Scroogie”. Corrie Loeffler helped write the two newer songs and sings on “Hey Scroogie”.

All nine tracks are available for free download: http://kendallbruns.bandcamp.com/album/christmas-in-cincinnati