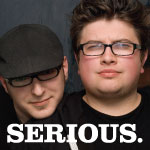 In their newest short film, Trajectory, Rob Nastoff plays a sad astronaut that returns to Earth to find empty streets and mass destruction.

Sean and Rob join me to discuss the short and their non-film related projects.

• Trajectory was created for the 48 Hour Film Project’s “48 Go Green” competition. For more about 48 Go Green, including a list of semi-finalists, visit www.48hourfilm.com.

• Sean’s illustration and design can be previewed at andthankyouforflying.com.

• Watch lots of online videos of Rob performing with OneTwoThree and Not From Baltimore.

• To decide for yourself if you think Adam Yencho’s final line is funny, watch All Two of Us.

• Sometimes Sean can be heard with his fellow Four Star-ers on the Crankcast.