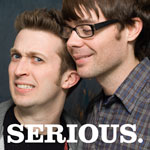 Dave Urlakis and Zack Whittington are Batterymouth, a two-person group that does long-form improv.

They just began a run of shows at Second City’s de Maat Theatre in Chicago, IL.

We discuss the high stakes of doing long-form improv, question iO’s name and see how well they really know each other.

Show Notes
• Batterymouth are performing their long-form improv show, Batterymouth: It Burns, every Friday night, January 21–February 18, 2011 at 7:30pm at Second City’s de Maat Theatre. Tickets are $12 at the door, $10 for students. Tickets can be purchased ahead of time online at www.secondcity.com.

• WiReD sheds some light – What Makes a Snowflake Unique?

• In 2001 the International Olympic Committee threatened Improv Olympic legally over its use of the word “Olympic” and their name was subsequently changed to “iO.”

• Zack is in a sketch comedy group called Long Pork. I interviewed a few of the Long Porkers recently: Let’s Get Serious with Long Pork

• Dave also performs with the Best Church of God and ComedySportz.

One thought on “Let’s Get Serious with Batterymouth”